Now that I've made one my obsession may or may not be over.  It remains to be seen (I think I really want to make one more for myself--I already have an idea cooked up).

So I got this bug up my butt to makeover an Altoid tin.  I just had to do it but for some strange reason I needed a reason to do it (it couldn't be a "just cuz" craft like the majority of my stuff).

Then I remembered my sister's birthday is in a few days so. . .

How cool would it be to make an Altoid tin into a birthday card/gift? 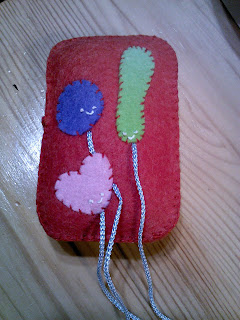 That's the front/top of the tin.

Since I abhore actual measuring (you know, using a ruler and all that) I just did the ole trace the shape onto paper to make a pattern and cut and go.  The whole top is covered in felt (my good felt--yeah, I've been hoarding it but that's so dumb so I'm going to use it more for just whatever I feel like).  The balloon design is from a Wild Olive embroidery pattern.  The tails are some string an internet friend sent me and I've been actively looking for uses for and this was perfect (just had to seal both cut ends with a wee dab of modge podge). 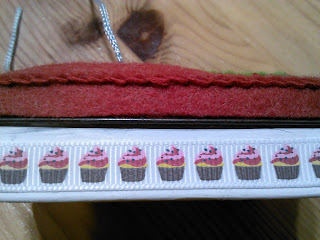 Side view.  Like I said, the top/lid sides are covered with felt (glued down with modge podge) and the top piece was blanket stitched to the sides (and lightly stuffed).

The bottom I covered with a few coats of acrylic paint and then glued down the cup cake ribbon.  It was only AFTER I dutifully put on multiple coats of paint (and one modge podge top coat) that I realized the box couldn't easily open and close anymore.  Who knew there was so little wiggle room in the size (mostly on the corners--you add any thickness there and forget it, that bad boy is not going to open easily).  So I sanded the paint off (just along the top) so the box would open and close smoothly.  Then once I was all done, I added just a very thin coat of paint to cover the scratch marks (because they were driving me nuts--looked so junky).  But the corners were still a wee bit too thick so I had to take my finger nail to the curves of the corners and "distress" the paint.  Once that little bit of paint was gone the box opens and closes smooth as silk.

Next time I'll know better (and if I really wanted to re-do a lot of tins I'd probably invest in some spray paint and just give the bottoms a light shot of Krylon which would probably be a lot less thick then generic acrylic craft paint--see, if you think it out a bit it makes things so much better).

If it weren't for the batch information (which they stamp on the back outside wall of the tin--back below the hinge) I probably could have just gotten away with sanding down the very bottom (where the nutrition info is) and giving it a few coats of paint.  But I had to get rid of that batch info so. . . 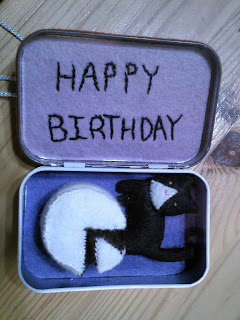 And what it looks like inside (when the recipient opens it).

Very simple.  Just embroidered the note on some felt and glued it (w/modge podge) into the lid.  Yeah, the stitching is a little warbly in places and it irked me at first but then I realized it really does look like my hand writing (which it is since I just took a ball point pen and lightly wrote the words out) which wouldn't be perfect either (going slightly up/down hill and all that).

The colors don't pop in the pic but the top is a light purple (not quite pastel) and the bottom is a richer/deeper purple (but not the darkest I have). 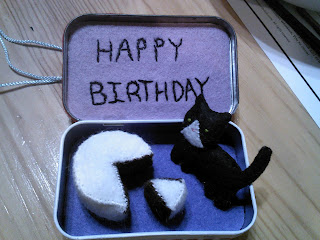 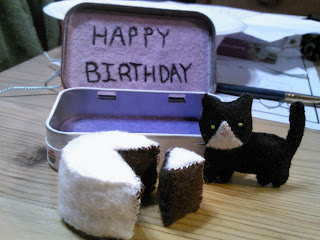 The cuteness erupting forth! 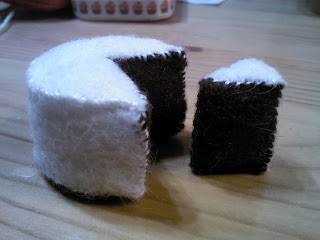 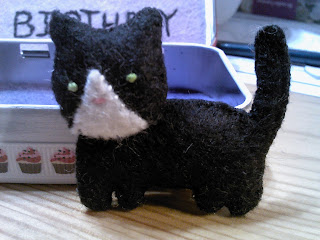 I made him to slightly resemble my sister's cat, Lowell.  Lowell has white feet but at this point I couldn't get the socks to work out (this is the first kitty I made like this) so I abandoned them.  I stretched out the tail a bit to mimic Lowell's giant monkey tail (really, he has this super long tail, it's crazy).  You may notice the lack of mouth.  I thought about giving him one but once I got used to this look I just coudn't add a mouth.  And some cats don't have noticable lips, so they could kind of appear to have no mouth (ok, I'm reaching on that but just go with me).  I also didn't put on any whiskers.  I just didn't know where to situate them and I couldn't decide if they should be just stitches or if they should be dimensional (little whisps of floss).  So instead I went minimalist.  I can always try out other things on the kitties I continue to make (since I plan to make a lot more of these style kitties).

OH, the pattern is from Nuno life.  Great free patterns and tutorials.  I want to make a siamese cat just like the one in the tutorial.

AND, I want to re-make another tin.  I'm thinking it could be a space ship with a wee alien inside.  Yeah, that idea is really lingering in my brain so I might just have to do it.
Posted by JLVerde at 9:17 AM